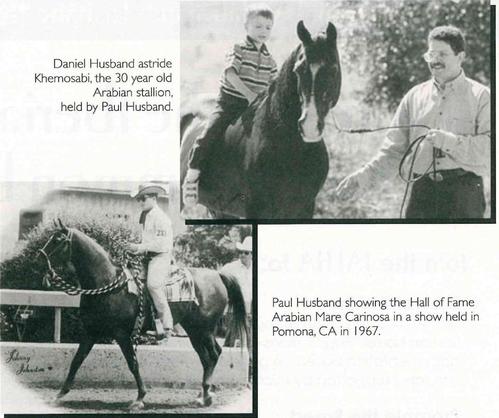 Paul Husband said good night to his secretary. As she left, a respected Beverly Hills lawyer walked in with a briefcase. The man set the leather case on the table, opened it and began counting out cold, hard cash. Paul helped him count and they didn't stop until they counted out $70,000, thus reaching the end of a vicious war over the ownership of a champion Arabian mare.
Not all of Paul's cases play like scenes out of a John Grisham novel. This particular case was a result of an incomplete sale of the mare. Paul's clients sold the mare but had yet to receive the full (and hefty) payment. Meanwhile, the mare's pseudo owners were winning champion titles. Paul came to the rescue and had the matter resolved in two days flat.

The Arabian Attraction
​
Paul's foray into equine law was no coincidence. His parents, Dr. Bert and Ruth Husband bred and showed champion Arabians throughout Paul's childhood. They were also one of his first clients.Stallion syndication can be a tricky nuance of the horse world. When a stallion is worth a lot of money, they often have multiple owners. Each owner is seeking a profit, but legally dividing ownership and profits can be diffficult.

The Husbands bred Khemosabi, a famous champion stallion who eventually sired more than 1,300 offspring. Paul served as legal counsel to his mother, who was the syndicate manager of Khemosabi. During those years of operating of a major breeding stallion syndicate, Paul learned first hand about the problems a syndicate faces. He developed some new ways of doing things in stallion breeding syndicates, such as treating certain syndicates like securities.This allowed shareholders to sell stallion breedings at a controlled price and pay syndicate expenses out of funds from sales of breeding rights. A stallion syndication then functions like a small business for a greater profit by eliminating competition within the syndication.

"I speak horse and I speak law," Paul says. In fact, that's his mantra. Many of his cases are disputes between equine businesses and the Internal Revenue Service. Presenting financial information so that the government will interpret it in a fair way is part of Paul's specialty.

"I love the tax stuff because I'm never the bad guy" Paul says. "The problem has been created by someone else, and I'm almost always able to fix it. It's rewarding for me."

The Draw of Law

To the idealistic, equine law may sound like the perfect profession. It's horse-related and everybody knows lawyers make good money-an important job feature for anyone who wants to own horses. Also, those who have competed in their fair share of horse shows might be right at home practicing law. Paul says there are more similarities than you would think.
"Both pursuits are competitive and you can enhance your opportunities by preparation and practice," Paul explains.
The problem is, not even Paul could make a living off of just equine law
"The equine industry is expanding, as the recently released report done for the American Horse Council shows," Paul says.
But I am not sure that the equine law part is growing. There may be fewer horse businesses, in part due to the squeeze out of many small businesses using and owning horses in greater suburban areas."
In an article in the July issue of California Riding Magazine, Paul wrote about his experiences with a rezoning case in Orange County. Land use is an eternal battle, one horse people will always be part of Paul says he would love to work on another one. The issue is especially prevalent in light of a recent Supreme Court decision that allows local governments to seize private homes
and businesses if they want to put the land to other use.

"Horses are getting squeezed out," Paul states. "I hate to keep talking about the old days, but when I think about the atmosphere in the late 60s, it seemed like there were many more horse owners and businesses." It seems like a controversy with such an extreme effect on the horse industry would bring Paul clients looking to find a way to preserve their land, but Paul says he sees very few of those cases. Often only big businesses can afford to hire lawyers for those kinds of cases and most equine businesses are not big.

Life Away from Law

Paul might have donned the equine lawyer hat for many of his contributions to the horse industry, but he has an entire wardrobe of hats. For many years, Paul judged top Arabian shows. He is currently taking a hiatus from judging while he focuses on his other diverse interests, but he recalls the joys of judging with fresh exuberance. Some of his favorite shows were the Equestrian Trails Incorporated (ETI) competitions.

"I really like those because they're entry level,' Paul says. "You judge it fairly and honestly. I used to go coach the people who were weakest just so they would get something out of coming, even if it was just the judge saying,'You've got a nice horse there, if you get him to take the right lead going to the right you'll have a shot at a ribbon."

Paul told that very thing to a frequent, if temporarily unsuccessful competitor he often judged. The man was in his late 70s and had a horse who loved his left lead. When Paul suggested he try for the right lead, the man looked at him and asked,'What's a lead?--
To demonstrate the concept, Paul skipped around in the awkward way humans do when they're trying to look like horses cantering.
"I said,'1 haven't ridden your horse and I don't know, but real commonly show horses are trained so if you turn the head to the rail you'll get the correct lead,'" Paul recalls. "Sure enough, the next time the guy had a class, I watched that horse pick up the right lead as smooth as could be."

Paul admits he called the riders in early to end the class quickly. "I didn't want him to blow something because he was legitimately entitled to a fourth or fifth ribbon. I didn't want anything to happen that would make it unfair for him to get that ribbon. You should have seen his smile."

Thirty years in the horse industry and several laugh lines later Paul has a repertoire of fond memories. The horses and people that star in these stories have all done their part to shape him in some way. While none will be forgotten, there are some that remain brighter than others. One such horse was Fadjur. The horse's story is something of a fairy tale, the ugly duckling cliché.

Fadjur was the ugly duckling, sold for $400 to a woman who saved money by selling chicken eggs, while the horse's half brother Ferzon, was beautiful from the start. At his peak, Ferzon was ranked fourth nationally. But the ugly bay gelding is the one who achieved true greatness, surpassing his half brother as both a show horse and a sire.

"Fadjur was such a great halter horse," Paul says. "He had such incredible charisma. He was correct, but he was gorgeous. He had so much vitality. You felt like he was sitting next to you in the stands."

Paul's respect for the stallion was confirmed in 1974 at a major show in Santa Barbara when he was asked to judge Fadjur in the mature stallion class with an entry list 40 names Iong.There was a 3-year-old who won his age group class and was almost as good as the powerhouse Fadjur. Paul debated which should don the champion title. To decide, he had both stallions step forward from the line up and face each other, eye to eye.

"The old man snaked his neck out about another six inches and looked at that 3-year¬old with authority," Paul says. "And the young horse backed off We knew who the boss stallion was. Sol said,'Ok, you're champion,' It was the first show I ever judged and Fadjur was champion. He had it all,"

Old habits die hard, and just like his parents, Paul is always looking for his next champion Arab. His present herd consists of one horse. She is a yearling purebred filly named Dreamm Lover. Dreamm was bred to race, but even if she doesn't she is the apple of Paul's eye these days. Well, not the only apple. Paul is the proud father of three sons, two of whom he says have yet to show any real horse interest. The youngest may have caught the horse gene, though it has yet to be seen.

Paul may spend a lot of his time involved in complicated court cases and living real Grisham-esque dramas, but something about his character resonates a unique straightforwardness. Like the old days, when
things were a little more simple. Regardless of whatever complicated equine or courtroom battles Paul has yet to encounter, one thing is for sure. He will tackle them with the same quiet, assured confidence with which he approaches all the conflicts that arise.